Book 3 in the >Sinful Brides Series

In the third installment of USA Today bestselling author Christi Caldwell’s Sinful Brides series, a kingpin of London’s underbelly risks his heart on the woman he’s hired to protect.

At the notorious Hell and Sin Club nestled in London’s dark streets, Niall Marksman relishes taking the fortunes of the very same society that once disregarded his existence. Oh yes, Niall has sold his soul to the devil and paid dearly. It’s only when Lady Diana Verney appears at the gaming club looking for help that Niall knows that the devil has finally come to collect…by forcing him to protect the duke’s pampered daughter.

Disdained by the peerage and ignored by her father, Diana knows that someone wants to harm her. Her only protection is Niall, a scarred, intense man who lives and dies by the knife. Now her life and safety are in the hands of the most dangerous man in London. But a man raised on the city’s mercenary streets is adept at stealing anything he wishes—including a lady’s reputation and her heart.

Biting the inside of her cheek, Lady Diana Verney kept her gaze trained forward and continued walking.

She didn’t want to be here.

It was not the stench of decay and death that hung heavy in the air that repelled her, but rather—fear.

As a pockmarked attendant led her through the wide corridors of Bedlam, silence reigned. Their footsteps echoed eerily off the white- washed walls.

There is nothing to be afraid of. It is not as though there are souls streaking these halls, wailing with their own madness . . .

An endless scream sounded from deep within the old hospital, kicking her heart into a frenzied rhythm. Diana quickened her steps, those rapid strides setting her skirts dancing wildly about her ankles. It spoke to the hell of this place that she’d take her chances with the burly guard against the distant sounds of agony pealing around the halls.

After a long, winding journey, the man stopped alongside a non- descript wood door, nicked and marked, showing its age. It was just a wood panel, and yet Diana stared at it, transfixed. How very different this slab of oak was from the ornate, carved doorways in her family’s many residences.

“Ya’ve ten minutes, my lady,” he ordered, bringing her back to the moment.

Ten minutes. Coward that she was, Diana didn’t even want one minute.

And it did not have anything to do with the fact that if she was discovered in this very place, she would be ruined. Diana had been ruined long before this moment.

Nor was it fear for her reputation that kept Diana frozen.

It was an altogether different fear. One that could come only from catching a glimpse into your future. Given the one awaiting Diana, she wanted to flee. She wanted to run as far and as fast as her legs could carry her until the building, the woman inside, and all of it just faded to a distant memory that belonged to someone else.

Fingers shaking, Diana stuffed the handkerchief inside her cloak and pressed her palms against her skirts.

Battling back her panic, Diana managed to nod once.

The servant pushed the door open, and immediately the scent of feces and urine slapped at her face, burning her nose. She gagged and yanked out a kerchief, pressing it to her nose.

Diana’s fingers twitched with the need to clamp her hands over her ears and blot out those whispered words from gossips all over London.

It took a moment for Diana’s eyes to adjust to the darkened space. Not a sconce or otherwise strategically placed candle lit the window- less cell.

That harsh voice, familiar and yet not, rasped around the cramped chambers. Diana searched for the owner of it. Her heart lurched.

Her mother, the once regal, proud duchess, sat in a corner of the small cell. With her knees drawn tight to her chest and hair hanging greasy and unkempt around her back, she bore no hint of the woman she’d once been.

The all-powerful, leading hostess of London had been reduced to this animalistic creature curled in the corner.

With fingers that shook, Diana pushed her hood back.

“Diana?” The duchess struggled to her feet and took a lurching step forward. She stumbled and then crawled over like a wounded dog. Emotion clogged Diana’s throat at seeing the shell she’d become.

“Diana,” the duchess whispered. The stench of sweat and her unwashed body filled Diana’s nostrils. She choked on it, hating herself for noticing, hating herself for caring. In the safety of Diana’s sheltered existence, it had been so very easy to hate her mother for her crimes.

Only to find herself humbled and hurt by her mother’s suffering. “She came.”

“Yes, Mother.” Guilt and regret made those words come out hoarsened. She’d spent days working up the courage to come to this place. In the end she’d come because this was the woman who’d given her life and she’d owed her a visit. Now, seeing her again, sadness weighted that sense of obligation. Diana stretched a hand out, and her mother immediately slipped dirt-stained fingers into her own. She stared down at her mother’s jagged nails. Her skin was coarse and callused against Diana’s previously immaculate glove. The juxtaposition of hand and glove filled her with another wave of sorrow. How quickly a person went from living to . . . this.

“She is here,” the duchess whispered. “She’s returned.”

Is this what a life of solitariness did to a person? Where one carried on as though speaking to oneself?

“I am here.” Diana gave her hand a slight squeeze. “I’m sorry I did not come soon—”

“Are you a duchess?” her mother entreated, releasing Diana’s hands. She grabbed her daughter. “Tell me you’re a duchess.” Ragged nails bit painfully through the fabric and into Diana’s arms.

This is what she’d said?

The note smuggled from Bedlam into Diana’s hands had not been a need to see her only daughter or to express regret or shame for what she’d done, but to probe Diana on her married state? A vicious pain stabbed at her breast. “Mother?” she asked cautiously. For the whole of Diana’s life, her mother had hung to a hope that Diana would wed the Duke of Somerset’s son and heir, Lord Westfield. She’d been so deter- mined to see that match made, she’d tried to orchestrate the murder of Lord Westfield’s true love—Diana’s half sister. It had driven her outside these walls and by her questioning consumed her even within them.

“Lord Westfield,” her mother said, with an eerie normality to her tone at odds with her vacant eyes.

Her mother went as motionless as those macabre statues that lined the steps of the hospital. “Helena?” she parroted, as though she’d never before heard the name. The name of a woman she’d sold to a brute in the street and then tried to have killed by that same man years later. Her mother cocked her head at an unnatural angle. Then a mad glim- mer lit her eyes. “But is she not dead?” the duchess whispered. She shot dirt-stained fingers out and gripped Diana hard by her cloak. Dragging her close with a surprising strength, Mother shook her. “Tell me she is dead. Tell me it was not for naught and that you are to be the future duchess. Then it will be all right. A debt paid.”

Her stomach roiling with nausea, Diana wrenched away from the madwoman who’d given birth to her. She stumbled back, knocking against the thin metal bed with stained white sheets. “I am no duchess,” she said on a breathless exhale. “Helena and Lord Westfield are married.”

Her mother grabbed strands of hair and pulled. “No. No. No,” she moaned and began to pace the cramped quarters. Then she whipped her head up. The seeds of her hatred and madness glimmered in her eyes. “Payment is due. Must pay. Must pay. Must pay.” While the mad duchess muttered and mumbled to herself, Diana slinked slowly away.

She’d come here desperately hoping to see a scrap of good in her mother. Needing to see it. For both selfish and unselfish reasons. But there was no goodness left in her. Mayhap there never had been.

As she rambled on, Diana inched closer to the door, taking a step away. Away from this woman who’d given her life . . . and who’d also attempted to take away life. Two of them. Diana’s half brother and half sister.

Diana gave a quick rap, welcoming the uncertainty posed by the guard who stood in wait over the madwoman now prattling and giggling to herself.

Diana stumbled, tripping over herself in her bid for escape. Her body shook. This is my future. The pleading patients’ screams rose, bloodcurdling and desperate. Diana’s breath came in ragged little pants as she hurried onward to freedom.

Heart pounding in her ears, she sprinted down the steps. Holding her hood in place, she bolted across the street, her eyes fixed on the hackney that marked her path to freedom. She staggered to a stop.

Out of breath from her exertions, she drew great, heaping gasps of air into her lungs. Moments later her driver handed her up into the carriage, drawing her away from Bedlam and the horrors someday awaiting her there.

Diana let her head fall back on the squabs. 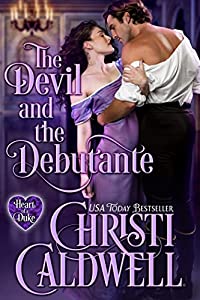